The "source code" was basically 45 MB of Drupal code with several additional themes installed.
The idea to solve the task was plain and simple (though the execution was a little bit tricky):

The newest entry in CHANGELOG file was this:


After downloading this exact version from the Drupal website and performing a diff (diff -r) on both directories, we quickly found out that there were several global changes ("diff obfuscations", if you will) applied to the "bloat source code":

Of course doing a diff on this turned out to yield lots and lots of false-positives. This called for a fuzzy diff which would ignore the "diff obfuscations"!


We achieved the fuzzy diff the following way (this was made for each "bloat" and original Drupal file):

And after this we ran a recursive diff again.

Looking for the backdoor

The diff outputted a 50kB file where most of the changes were either some leftover "diff obfuscations" (a small amount, easily ignored) or changes to .info files (datestamp, "Information added by [drush|drupal]").


Apart from that, there were a couple of meaningful differences, the most of which were in OpenID module (please note this is the "fuzzy" output, so it's kinda unreadable):


openid.inc
openid.module
The thing that was really weird was the OPENID_DH_DEFAULT_GEN set to 86 - after a lot of browsing we came to the conclusion that no one ever changes that value.


Looking into the original "bloat" code revealed these exact changes in the openid.module file (in openid_begin function):
It looks quite innocent at the first glance. And at the second maybe too.


The key is the drupal_map_assoc function, which has the following prototype:


Parameters
$array: A linear array.
$function: A name of a function to apply to all values before output.


So basically $user_enc contains a function name that will be called with the $host parameter - now this doesn't look innocent at all!


Yes - we found the backdoor.

The open_begin function is easily reachable from the outside - in the Login subpage you choose "Log in using OpenID", and whatever you pass is put in the $imaginably parameter.

Analyzing the changes you can see that $imaginably is split in two on the first "@" character into $user and $host.


The $user is then multiplied by OPENID_DH_DEFAULT_GEN (86), and put to a "long int to base64" function (_openid_dh_long_to_base64), and this is stored in the end in the $user_enc variable, which is passed as the name of the function that is going to be called.


Now the problem is to get the proper integer values for actual functions. After some attempts we settled for a brute force approach (source in Appendix B), which tested different numbers and after a couple of seconds outputted these two:


The exec function is exactly what we needed!


The $host parameter remained unchanged so we could try to "log in" using this OpenID ID:


And this resulted in a reverse shell. The rest was a formality: 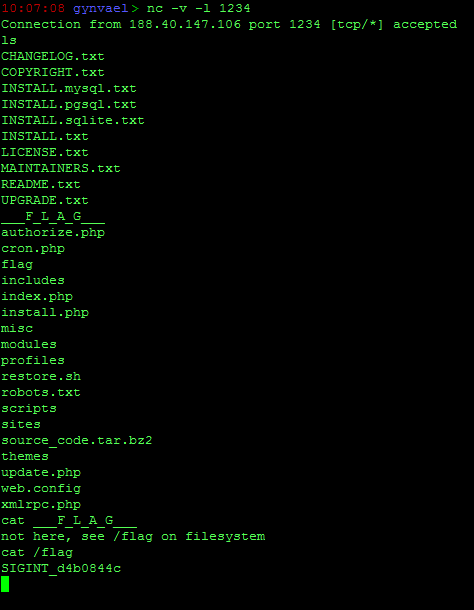 Either run this from Drupal, or copy-paste openid_dh_long_to_base64, its dependencies and the function below to a new file.
Posted by Gynvael Coldwind at 10:24