The "0x90" task was found in the "reversing" category and was only solved by three teams in the end. The task archive contained two files:

The "xor.bin" file was eight bytes long and contained uninteresting binary data, while "0x90.run" turned out to be a 64-bit statically compiled ELF file of significant size:

Starting the program on an older machine throws the following error message:

Fatal Error: This program was not built to run on the processor in your system.
The allowed processors are: Intel(R) processors with SSE4.2 and POPCNT instructions support.

Interesting! Repeating the same action on a more recent hardware configuration doesn't seem to yield any evident results - the application successfully starts and extensively consumes CPU resources (using trigonometric functions), but nothing much happens on stdout:

Lacking ways to interact with a running process, we decided to do some actual reverse engineering at this point. If you load the file up in IDA and take a brief look at the entry point, it is clearly visible that the executable was built with the Intel C++ Compiler (ICC):

Following a cursory analysis, we were able to establish the logic of the challenge and its actual goal. Long story short, the program stores a 64-bit hash throughout its entire lifetime, gradually forming its final value in the following manner:

The program would then print out "sigint_" followed by the binary hash value casted to a textual form (i.e. each byte of the hash should be printable at this point, if it is valid). The exact implementations of the "merge_hashes" and "calculate_hash" functions are not relevant at this point; it is only important to note that the first ones `reduces` two 64-bit values into a single one using binary and arithmetic operations, whereas the second one calculates a 64-bit hash value given an input memory area.

In theory, obtaining the flag should be as easy as launching the executable and observing stdout. What makes it an actual challenge is the presence of the benchmark function, which further invokes one of two subroutines, depending on the CPU capabilities: benchmark_kerneldi_W and benchmark_kerneldi_A. In essence, each function were programmed to perform 10.000.000.000.000 (ten trillion) iterations of expensive SSE4.2 operations - something that would never realistically complete within the time frame of the CTF, which is where the problems begin.

There are several important conclusions we can draw here:
Considering the volume of requirements above, it is fairly troublesome to patch the program in a way that emulates the normal execution environment, but still removes the lengthy loop. While it is surely possible to develop such a patch, it is by no means elegant. The perfect solution would be to either:
Note that while changing the semantics of an instruction would typically require an x86 hardware debugger or ability to apply arbitrary microcode updates, there is a much easier way - you could use a CPU emulator, such as Bochs!

As both Gynvael and I had some prior experience with writing Bochs instrumentation (see here and here), I was happy to implement the idea. The next few minutes of development resulted in the creation of the following short code snippet:


The code would serve three different purposes - nullifying the benchmark loop and displaying information about the static image hash value and open64 syscall return value for each of 1000 external loop iterations. After building Bochs, booting up an Ubuntu 13.04 Server 64-bit guest (we happened to have a Bochs hdd image handy due to unrelated bochspwn project activity) and starting the 0x90.run executable, we could observe the following emulator console output: 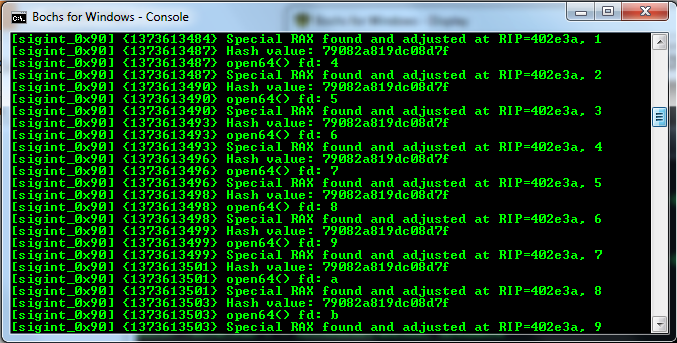 While the executable in the guest system was running at around one iteration of the external loop per second, I reverse engineered and rewrote the merge_hashes, calculate_hash and final hash generation code to C++. Once I found that the static image hash is 0x79082a819dc08d7f for every loop iteration (i.e. no static memory of the program changes between) and the open64 numeric file descriptor values start at 4 and increment by one, I ended up with the following implementation:

The output of the above code was as follows:

As you can imagine, "sigint_mcHamm3R" turned out to be the correct flag. +300 points. :) While writing a C++ turned out to be faster than waiting for 0x90.run to complete in Bochs, you could as well just wait for around 30 minutes and grab the flag directly from the program standard output: 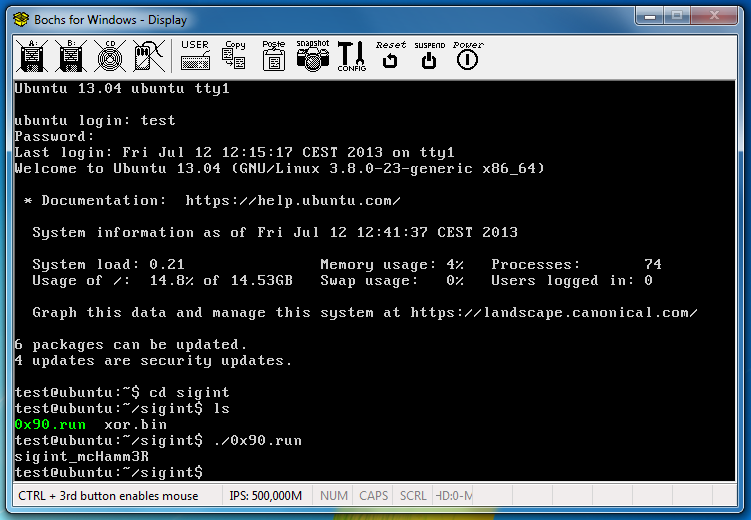