As usual, when CTF tasks are marked with the exploitation tag, a binary file is made available and contestants are instructed to connect to a specific port on a specific IP in order to solve the challenge.

Executing the file command on the provided binary gives the following output:

If you are as old as I am :), then maybe you remember this Japanese company under name Hitachi, which developed its own CPU core called SuperH (SH). This is it; the company at some point sold the IP rights to Renesas, and we call this - now somewhat forgotten CPU architecture - Renesas SH. By the way, the predecessor of this CPU - SH-2 - was used as main CPU in some Sega consoles back in times.

Well, after a quick session with a search engine I managed to find both big- end little-endian SH emulators for Linux (in the qemu package), but further research revealed that the operating systems (user-lands) come in the little-endian flavor only and we have a big-endian binary. Bummer!

Having a working OS image would be a real help. In such case I would be able to debug the thing, and tests various stages of the exploit developed. Unfortunately, creating even a stub of OS (bash and friends) would take quite a lot of time, so I decided to simply use the little-endian flavor. And it turned out to be quite useful later on.

While booting the emulator, I opened the file in IDA-Pro, and took a look at the resulting disassembly stream. It was rather straightforward. I was able to rather quickly understand the meaning of basic assembler instructions (mov, jsr, rts, sts, lds, trapa, nop) and how the registers are utilized (e.g. r15 as SP). The only peculiar thing was the syscall execution procedure (function names are completely mine).

As you can see, the syscall value is passed in r4, while by reading the Linux kernel I found out that it should be r3. Also, arguments to syscalls are passed in r5, r6, r7 while in the vanilla Linux kernel it's r3 (syscall number), r4 (1st argument)... and so on.

In order to run a working binary (on a little-endian system) I had to modify it (i.e. the IDA-Pro assembler output) a bit before compiling with gcc. After this modification, the maybe_syscall took the following form:

Let's compile and run it:

BTW, the -Wl,-Tdata=0xffa000 flag is necessary, because the original binary used this memory chunk as a stack, by doing:

Also, addresses of our binary will differ from the original one due to this modification so I didn't care about moving the .text secion to the address of 0x4000.

Ok, now we have a working binary, but it's incompatible (endianess). Still, it's very useful for testing. Typing a lot of ASCII characters (a typical first test) as a response to Input password: resulted in

Is it our bug? We could read the output of IDA-Pro, but we can also (in absence of working gdb, which was simply crashing with any binary) use... 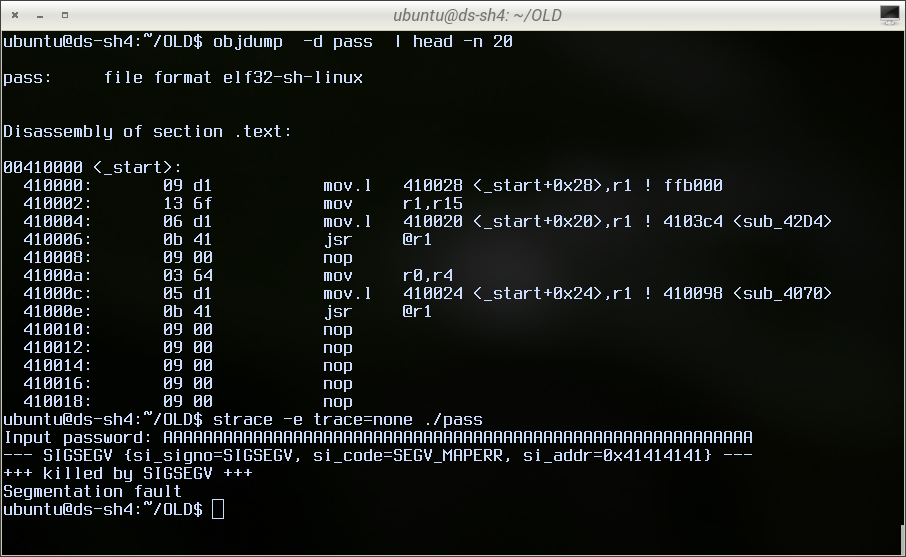 Well, ok, the SEGV_MAPPER value can stand for at least a few things: unmapped address, bad permission bits, address execution fault, address fetch fault etc. So, reading output of the disassembler to confirm our assumptions is always a good idea. I did it (spent some time with annotating functions and trying to understand the execution flow), and yeah, that's out bug (buffer overflow on the stack and no ASLR/PIE/SSP).

Should be easy, right? Well.. not really, the stack is non-executable. Or, rather it is, but only under the qemu emulator and not while testing it on the CTF infrastructure (by creating a simple exploit, and compiling it under my SH emulator, which can, BTW, compile both for little- and big-endian CPUs).

So, were they using a real SuperH machine (Linux on Sega:)? Interesting. At this point the only one thing I could think of was, wait for it, ROP! :)

By using user version of the qemu-sh emulator (qemu-sh4) and testing it with AAAAAAAAAAAAAA..... input I realized that ip, r4, r5, r6 and r7 registers held my 0x41414141 values as well, which seemed awesome, because authors of the challenge basically must have given to us a ROP gadget which is preparing registers for syscalls. One of those gadgets is located here:

That's real gem! We can basically populate stack with data, and the code will simply load registers and call whatever function we like e.g. maybe_syscall (i.e. it will call any address, but we can redirect it to the maybe_syscall function by setting PR to a correct value).

There's only one thing that needs to be changed here though. If we did what I just described the maybe_syscall function will loop itself forever, because under SuperH the last return address is stored in the PR register and not on the execution stack. Therefore I had to jump trough a jsr/rts stub, which can be found here:

At this point I didn't know what file-descriptor number will the open syscall return. I assumed it's 3, but one never knows, so I chose to brute-force it :). The resulting shell-code is attached below: (admit it, bash haxxxoring is the best haxxxoring, python s..cks :). An alternative would be to invoke close(3) before calling open.

After couple of iterations (because the resulting file-descriptor from the open syscall can be anything, and we need to match it with the second read syscall), the password will appear in /tmp/haslo :).