Three weeks ago, the Dragon Sector team represented by j00ru, valis, redford, mak, tkd and q3k took part in the onsite finals of the PHD CTF - a team hacking competition organized during the Positive Hack Days conference held in Moscow on 21th-22th of May, 2014. Since it was the first time for our team to travel to Russia to play an offline CTF, and Positive Technologies together with the Techno Pandas team have always been known for running great events, we were really excited to be part of this year's edition - and even more so given that we really enjoyed the qualification round, which we also won by the way. In this post, we would like to tell you the story of the finals as seen by the members of DS.


Prior to even arriving in Moscow, we received several e-mails outlining the different rules and specifics of the CTF system. As it turned out, the organizers had planned something far beyond a regular Attack-Defense or Jeopardy style competition - a mixture of the two combined with SCADA and ATM hacking, puzzles aligned with the PHD storyline, and game mechanics involving aspects of resource planning. While we don't have a point of reference to compare with previous years, we can definitely say this year's edition was pretty damn epic. The overall logic of the game is well illustrated by the image below. Once we checked in the hotel, we spent a fair part of the evening figuring out the best strategy to use during the game ahead of us. 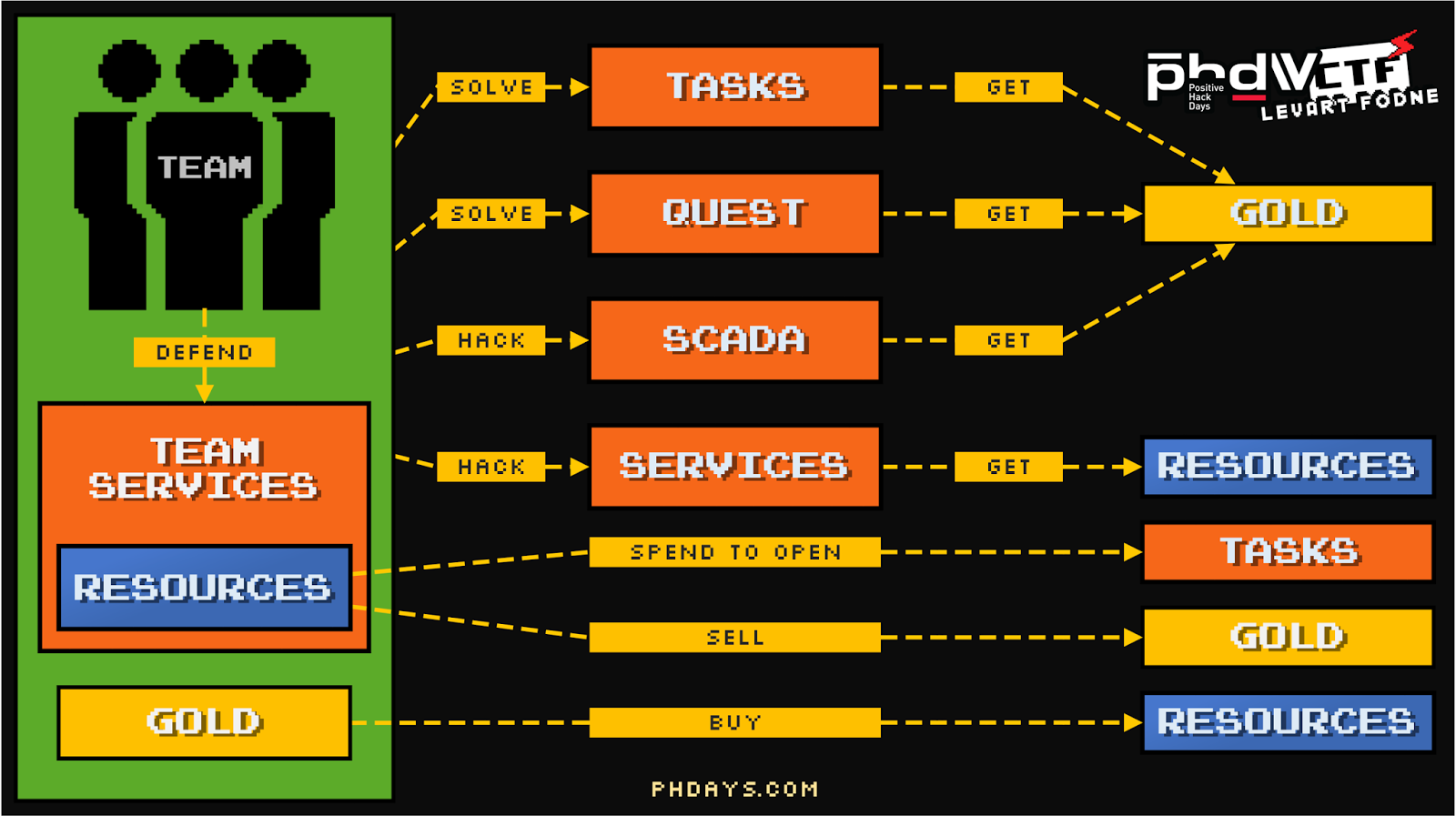 On the first day of the finals, we came to the conference venue early so that we had enough time to set the infrastructure up and double check everything worked properly. The images of virtual machines were handed off to all ten participating teams at 9:00, and we had until 10:00 to make sure the three services were up and functional. Then, the CTF started.

The three services we found inside the Linux VM were:
Keeping one's services online and exploiting vulnerabilities in the competitors' boxes would earn each team three kinds of resources (each corresponding to one service), which could then be exchanged for gold (ranking points) or used to open some 16 jeopardy-style tasks. For the most part of the first day, we focused on solving the tasks, as this is generally our area of expertise. The categories we could choose from were forensics, reverse engineering, web, cryptography and pwnables, and the challenges were rated from 1000 to 5000 points based on their difficulty. At the same time, we tried to make sure all of our services were responsive, and also tweaked them in a few simple ways (such as adding code for submitting flags in cardbook). At 18:00 sharp, when Day 1 officially ended, we were at the top of the ranking with service downtime less than 5% and one quest and four jeopardy tasks solved (including a lockpicking one ;-)).


When the second day of the contest started at 10:00, we could see that the other teams worked hard on the offline tasks during the night - within an hour after the start, several teams submitted their flags, consequently pushing us down from the first to the fifth place. However, we have quickly caught up with them by solving another four tasks, and also by significantly improving the winning rate of our cardbook bot by implementing several simple heuristics and stealing flags off other teams by exploiting a RCE vulnerability in the holynet service, while patching the flaws in our binary at the same time. The latter was possible thanks to the fact that we found a third-party unpacker which we then subsequently used together with a decompiler to analyze the C# code, spot the bugs and recompile the executable as necessary. Truth be told, we never got around to attacking the SCADA systems or doing the special Qiwi quest, since there was just enough work for each of us in the area of services and tasks.

Things got really intense around 30 minutes before the end of the competition - we were the first team to exchange all of our pending resources for gold, thus gaining more than 15,000 points in a few seconds and instantly taking the first place. Seeing this, all of the other teams started selling their resources too, getting dangerously close to our score. The team that got the closest was int3pids who were only ~300pts away, which is less than the lowest-rated task, with others keeping the distance of a few thousand points. We spent the last minutes making absolutely sure that all of our services and exploits were running, but also fending off DoS attempts launched at the holynet service by another team. There was one scary moment when the BalalaikaCr3w team submitted a flag worth 5000 points just five minutes before the end of the CTF, jumping to third place (previously taken by More Smoked Leet Chicken), just a thousand points away from us. Fortunately, no other teams surprised us with any hoarded flags and a few minutes later we were enjoying a moment of triumph. :)


After the CTF was over, all teams were asked to make room for another competition which would take place in the same area: 2DRUNK2HACK, with the goal of hacking a web application behind a WAF while drinking tequila shots for being detected by the protection system - exactly the type of event you would expect from a Russian conference. Soon after that the closing ceremony started, going through the numerous contests and eventually reaching the CTF results. All participating teams were handed their respective banners, and the top3 teams also won actual prizes.

Our overall experience with the CTF was really positive, both from the organizational side (partial flight reimbursement, transport between the hotel, airport and conference venue, the CTF area) and technical side. There was a lot of things to hack, so each team could choose their favourite way of earning points, the challenges were interesting (and quite difficult, to be honest) and the infrastructure worked properly throughout the finals. A few minor hiccups such as loud music or a task down for a while are certainly not sufficient to efface the excellent impression PHDays made on us. We will definitely see you guys next year!
Posted by j00ru at 23:17