Looking at the binary for the first time we can say that this challenge is a 64bit ELF binary that does something related with ptrace. Because Hex-Rays fails with decompiling 64bit code we need to play a bit with a disassembler and find out how does the program work. To solve this crackme I’ve used Bokken (this is quite nice frontend for pyew & radare). After some time spend in front of disassembler and debugger I was able to say that the program has used a bit unconventional way of sending the messages that looked as follow:
Each (except parent) process had its own dispatcher of incoming messages that was checking address 0x618180 and when it was set to some not-null value, the corresponding handler of the message was called (based on the message type). 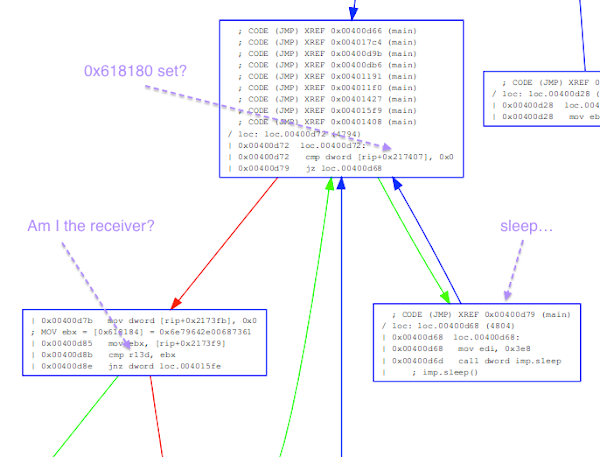 So when the message arrived, first it was checked if it was addressed to self node (which id was hold in r13) and if not, it was forwarded to previous from 7 nodes using the same method as described earlier (attach, modify memory, detach, signal). Using this scheme the parent process could send the message to any node having the handler only to its first child which would forward the message to the other node and so forth...

In fact the child process forwards the message to its predecessor and the initial predecessor of the #0 child was the parent node but the parent process changes it by sending the message to #0 asking to set the default forward node to #6 (function with offset 0 in procedures table, let’s use one-based indexing and name it the message of the first type).

Using this message forwarding, the parent process sends many messages of the second type to #0 where each message is addressed for different child:


From high level perspective the handler of the second messages does quite a simple thing, just stores the memory - argument of procedure - to it’s internal buffer (*0x618140 + 4):


It takes a moment and after that we are asked to enter the string of our choice:


When we enter some password, the parent process starts to send the fourth type of messages to its first child:


but as we can see, the child forwards it to its predecessor:


In practise it looks like each child except the last one sends the message to its predecessor addressed to its successor, so the message is forwarded by all of the nodes to finally reach its destination. If you look closer to this procedure it not only forwards the data but also changes the state using the received letter. Finally when all of the letters are sent, the parent submits the last message (third type) that is some kind of a check of a password and looks like this:


So in short: send the message of the fifth type to each node except myself and wait for the answer. In the end send the message to parent informing if each of the nodes verified the password as true.


Now having the knowledge how all of this stuff works, we could try to find the string that will be verified by all of child nodes. The value returned by each child is:


which looks like some kind of map… and in fact it is sort of map or finite state machine whose states are described by this fragments of memory previously transferred to each of the nodes. Now doing the boring part of analysis this memory chunks and transforming it into finite state machines we are able to discover that each of children checks some part of the password.


All of these parts can be easily merged to the final solution: {my_synchronization_skills_suck}
That's all, nice one.
Posted by Unknown at 15:17