Last Friday we took part in an local CTF - the first offline one for Dragon Sector - Insomni'hack 2014 in Geneva, Switzerland. It was a 10 hour long jeopardy-style CTF with a separate scoreboard for teams and individuals. We managed to both survive the night (even though MSLC was trying to seriously scare us) and eventually win the competition! On another note, we are looking for sponsors. 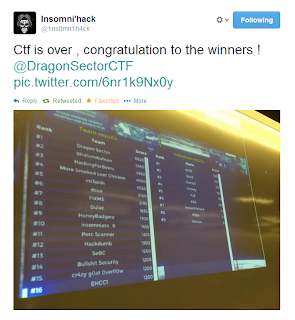 The CTF started some time after 6 p.m. on Friday, at the Palexpo convention center next to the Geneva airport. The CTF area consisted of two wings, with all of the players split between them. At least 200 players were present, including some of the top CTFTime.org teams, such as the aforementioned MSLC, StratumAuhuur, int3pids or dcua (though it seems we were the only ones lucky enough to be able to come in full an 8-person squad).


There were 30 tasks (+ several bonus ones) in total, ranging from 50 to 600 points each, divided into the usual categories (pwn, web, stegano, crypto, re, and so on). The competition started with five tasks available (each worth 50 points) with more challenges unlocked in batches after reaching a specific point limit (150, 450, 1050 and 2250), or after a few hours passed. 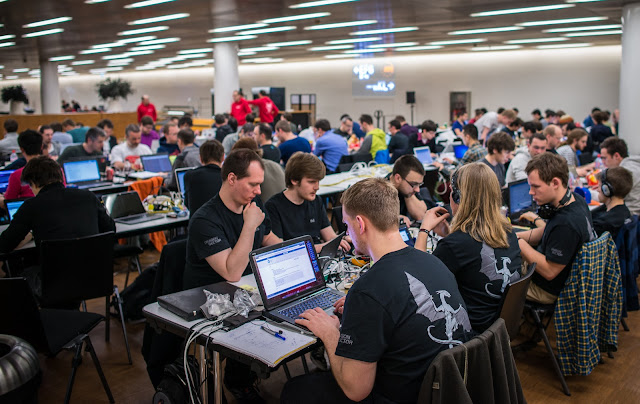 Our opponents were both skilled and relentless, with the very top of the ranking being reshuffled quite frequently. Thankfully, at one point in time soon after the contest started we did manage to achieve a point advantage and keep it until the end of the event. Having said that, we were not able to solve all challenges, so the battle lasted until 4 a.m. (the official CTF closing time) with most of the top teams, including us, scoring points till the very last minute.

In addition to that, at one point MSLC started to gain a lot of points in the rankings, eventually minimizing the distance and then surpassing our score by a few hundred points. We were really freaked out by this fact, especially given that we were solving the tasks at quite a decent rate and they just skyrocketed in front of us! After some short period of time it turned out that they had found a bug in the flag submission logic and thus were able to submit each flag at least twice - in the end, they reported the bug, received well deserved bonus points and the score went back to normal. :)


Before we get to the next topic, we would like to thank the Insomni'hack organizers (especially Nicolas, Alain and Michael, as well as SCRT & 0daysober in general) for both making the CTF happen, organizing the CERN visit and dealing with the many e-mails our captain sent to them prior to the event including various questions, requests, etc. Great work guys! 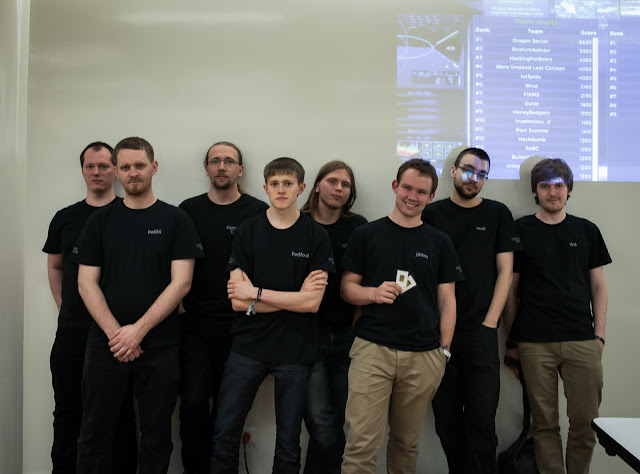 Now, about the other matter.


As you may know, this year has been quite eventful as far as CTFs are concerned, including both single-tier ones and qualification rounds for various offline events. So far, we have managed to qualify to the finals of all contests we have found important, and therefore we have travelled or are planning to travel to:
In some cases, qualifying from top positions grants partial expense coverage for the travel (the case of CODEGATE) or several hotel rooms provided by the organizers (the case of Insomni'hack). In other cases, the organizers go out of their way to help teams with their travel costs (the case of PHDays). Otherwise, and this is especially true for DEF CON CTF, the teams just have to manage on their own.


After doing the math and then recalculating the results over and over again, we came to the final conclusion that even considering our saved up winnings and personal input, we just won't be able to travel to DEF CON without external help. So...


Dragon Sector is looking for financial sponsors. At this point we are open to all options, including a one time sponsorship related to DEF CON CTF or a longer relationship. We are also open to discussion regarding various requirements and expectations which would satisfy potential sponsors.

If you would like to discuss the details, please e-mail our captain and vice-captain at gynvael@coldwind.pl and j00ru.vx@gmail.com.

For now, that's it. Keep a look out for more technical write-ups and status updates soon!
Posted by Gynvael Coldwind at 14:53