The zbin task was a simple reverse-engineering/crackme challenge on the Olympic CTF Sochi 2014, which was organized by the MSLC. We've used the word "simple" as the application itself was indeed simple (from our narrow point of view); what made the task worth 500 points was the unusual platform it run on - 64-bit GNU/Linux (SuSE) running on an IBM's s390 CPU. On behalf of the Dragon Sector this task was solved by gynvael with aid from jagger and mak.

The first step was to be able to run and disassemble the binary - the last part turned out to be problematic as the usual tool of our trade - IDA - doesn't support the s390. We ended up creating the following setup:

Surprisingly, we also used IDA, but only to get a general view of the binary and C++ name demangling.

We started with the basics - strings and objdump for disassembly. In the string dump we've spotted two interesting things:

We then focused on the disassembler output itself. Since it was kinda hard to read we decided to take some time and create a Python script that would append a description of every s390 assembly mnemonic in the same line as a given instruction - in the long run this saved us quite a lot of time looking up all the s390 weirdness in the manuals. The final disassembly form we've worked: 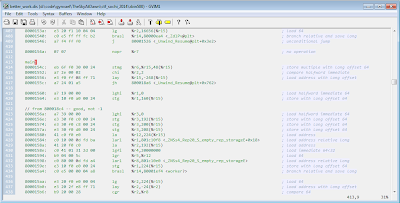 After a brief analysis of the code (which did take some time since we were not familiar with the s390's huge instruction set) we were able to pinpoint main(), the decompression of the wordlist and checking if enough parameters were provided (+feeding the first one into strtol). And here is where we got lucky - we decided to run the application with some numbers (123456789) and look for them under the debugger, but before we ever got to that we spotted a SIGABRT being raised:

And then it "clicked" - we partly-deduced and partly-guessed that we need to provide the index of the word in the dictionary and then there will be some-kind-of-a-hash-check, and, if it passes, the message "Correct! Use MD5 now." will be displayed. So we put aside other ideas and began looking for the hash check (going backwards from the string reference).

Shortly after we run this we found exactly one match (format: index word hash md5_of_word):

And, after adding CTF{...}, it turned out to be the correct flag.

To sum up, as one can see we didn't have to analyze the task too deeply - did in fact skipped 90% of analysis of its logic - this was mostly due to the lucky verbose SIGABRT. All in all it was a really fun task on an interesting and unusual platform.

Posted by Gynvael Coldwind at 00:06