This is a task from the ASIS CTF Finals 2013, "Stego" (steganography) category, and it was solved by 2 teams including ours. This was one of my favorite tasks on this CTF, since it was unconventional, interesting and didn't involve too much guessing.

We were given the following description:

Find the flag. Flag is in the form of ASIS_X which X is not a MD5 hash.

And the following PNG image: 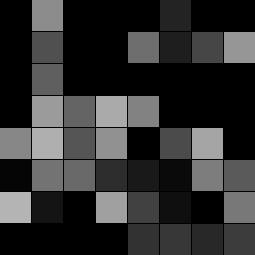 We can transcribe to coordinates of each square, counting from top-left, in the order pointed to by the above chart (by luminosity):

There are a couple of things that can be deduced here:

At this point I've changed my approach. In the task description we were given the information that the flag begins with ASIS_ (same as the flags in most of the tasks), so we did have a part of the plaintext. Encoding the ASIS_ string to base64 we get QVNJU18=, so we are sure that the first few chars will be Q, V, N, J, U and 1 (I'm not taking the last char ("8") into account, since it contains two bits of the next character 8-bit character, which in this case are of course zeroes, but could be anything in the full flag).

Let's test this idea for the second square: bottom-left coordinates are 5,2, which means that the idx is 5 + 2 * 8, so 21, which is exactly the second element in the above number list!

So to get the flag you need to, going from the darkest to the brightest square:

After that you will get the string QVNJU19GTEFHM2dxaXpiS0RPWkY5b3hLejZI, which, after decoding, will result in the flag: ASIS_FLAG3gqizbKDOZF9oxKz6H.

From what I've read on IRC most of the teams were really really close with this task, but didn't end up testing the bottom-left coordinates. Funnily I did test this coordinate system, but due to a bug in my code I didn't get the code until did the plaintext attack - lucky me ;)

Posted by Gynvael Coldwind at 22:02